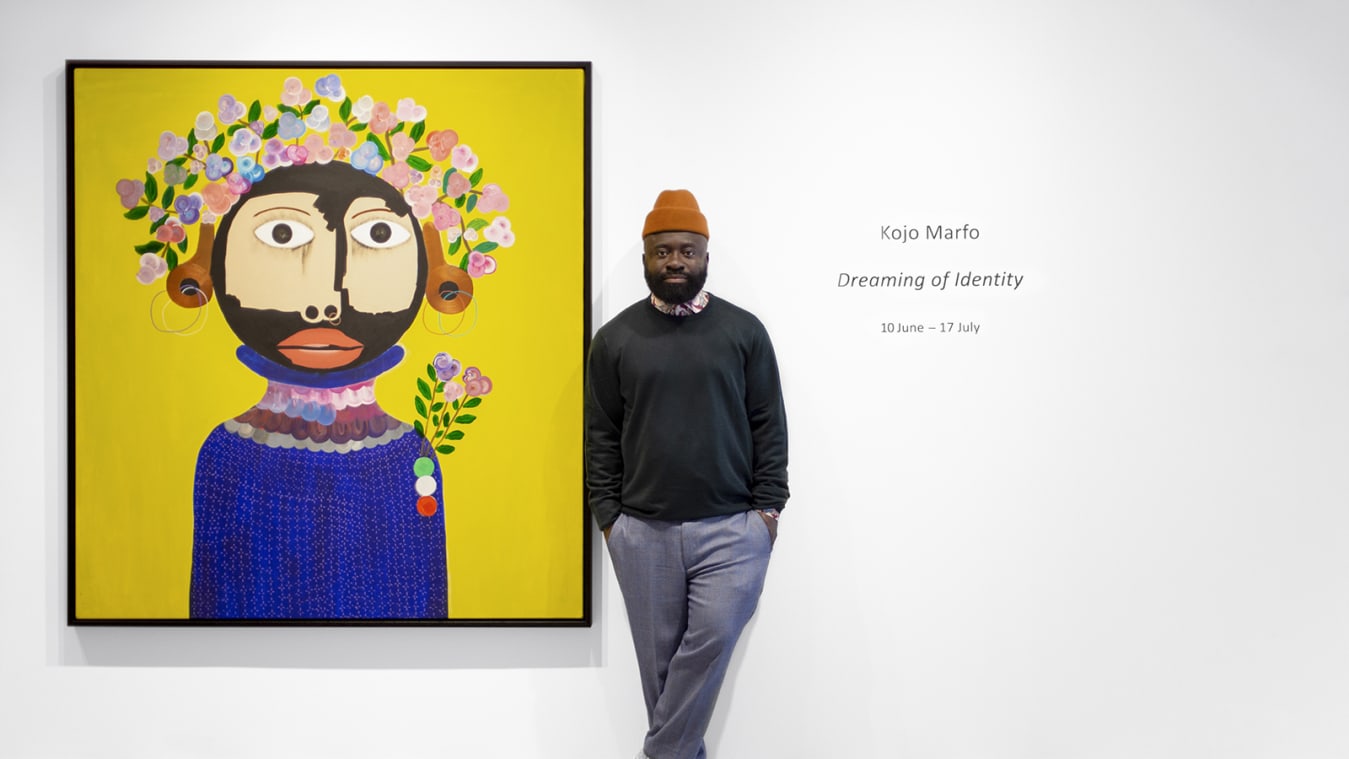 The JD Malat Gallery in London’s Mayfair is everything you’d expect an exclusive art space to be. The premises are immaculate and highly ordered, the owner and staff even more so.

Into this atmosphere bounces the ever-smiling and slightly chaotic looking Kojo Marfo, an artist who is leading the life he has always dreamed of.

“I don’t fit in,” he said. “I don’t fit into the nine-to-five guys. I fit in to the guy who wakes up in the morning, sits in a coffee shop, and looks around and observes society.

“So, in a way, I just felt like I wanted to be different. I wanted to be that guy, that crazy old guy who lives in the neighborhood with everyone wondering what he does in his house.”

What he does in his house-cum-studio, a suitably shambolic set-up in south London, is attracting an ever-increasing following.

His recent work is flying off the walls, and a sold-out show at the JD Malat Gallery is the latest accolade in a long list of achievements. Vindication, perhaps, for a lifestyle he has never compromised.

The work Marfo produces is big, bright and bold, but he doesn’t necessarily want it to be beautiful, choosing instead to create pieces that “speak truth to power.”

Raised in a rural town in Kwahu, four hours north of Ghana’s capital Accra, as a young man he read about how Pablo Picasso had studied African art.

It was the realization that the great Spanish artist had been influenced by artefacts and masks that existed on the continent that inspired Marfo to pursue his artistic dreams.

Marfo has lived in New York and several cities in the UK and sees himself as something of a chameleon, travelling the world and fitting seamlessly into the environments he has chosen to inhabit.

When we meet, he is every bit the London gent. “I mean, I’m a man wearing tweed,” he joked. “You know, surely I have adapted. The host nation has always been a good host. I address my work as ‘cultural hybridity,’ because I have been to so many countries. I’ve absorbed them.

“The diversity of his influences can be seen in the varying symbols in his work. Everything from Indian cows to Elizabethan ruff collars features in a single painting.

More evidence of his more-than-comfortable co-existence with British tradition has come with a recent collaboration with quintessentially English luxury brand Aspinal of London.

His work will appear on limited edition silk scarves and pocket squares — it represents a move into the mainstream.

How does he want his work as an artist to be regarded? Marfo believes that everything in life is political to a certain extent and says he wants to use his role as an artist to talk about the issues that he thinks are important — from social stigmas around single parenting to gender identity.

“It is political,” he said. “It’s not identity politics, but it’s political. So usually when I start kind of rumbling about things, mostly it’s all about love. It’s all about bringing people together.

“There are good people in this world. I want to be that kind of guy who will always promote that mindset.”